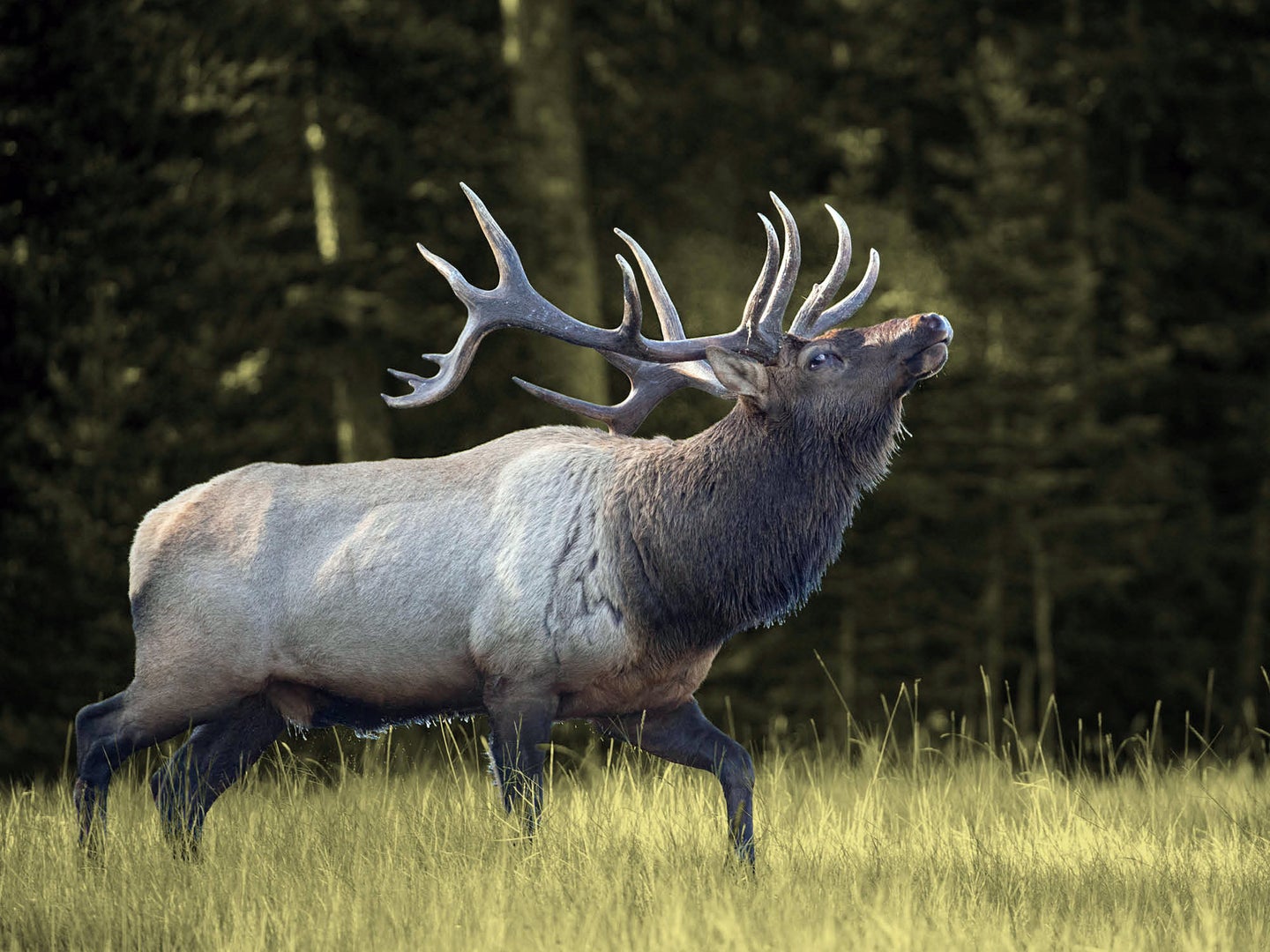 A rutted bull elk ventures into an open meadow in the high mountains. Donald M. Jones

“OH MY GOD,”I said to Randy. “Here he comes.” We knelt down right in the open meadow, bending hard to the ground, as if we could hide behind the little tufts of grass and the last few blooms of the aster. We might as well have rolled in some punch carts for how well we were hidden. But that didn’t stop the bull.

He left three cows perched on the horizon at the top of the slope and thundered into a ditch between banks of neon aspens before running into the meadow. At 100 yards or so, he slowed to a walk and then, at 50, to a brisk walk. At 30 yards, he stopped to yell and spoil in our faces. And then he kept coming – immediately.

I couldn’t risk drawing, so I just held the bow in front of me and tried to disappear. It was absurd. I felt like a hippopotamus trying to hide behind a lamppost. Besides, I knew that only one of two things could happen: the bull would either come to his senses before I could shoot, or he would trample us.

I almost welcomed the notion. Not to be stepped on, but that the hunt was already as good as over. This meant there was no way to hit the punch and I wouldn’t have to explain punch etiquette to others. Because I didn’t have to kill a deer on this trip.

The only reason I had any chance was because the place was so steep. During the ride, I remember looking up to my left and taking a picture of early fall in the Rockies, and then looking down to my right and seeing certain death. Ahead, our train of horses roped a path that skirted the precipice of a great drop, where gigantic boulders and mangled dead piled up in a heap a hundred yards below. Randy, our wrangler, who was at the head of the train, turned to the group and said, “Don’t forget to fall on the high side.”

This was my first deer hunt. I didn’t even know exactly what Randy meant by that, but I knew that one of my major personality flaws is a tendency to forget things—and that the horse would have more say in which way I fell. . “Don’t worry,” Randy shouted. “Your horse doesn’t want to die either.”

We rode 8 miles in Colorado’s Gunnison National Forest to Dark Canyon, where in 1899 John Plute killed his world record long deer and, after bagging the meat, returned for the antlers only because no one believed how big he said he. they were. Across a spring-fed creek, threading its way through a wide, grassy bowl, our tent camp awaited us—and all the deer we hoped to hunt were straight uphill from there.

I had a tag in my pocket and carried a bow as a backup, but my job on this trip was to accompany and help other hunters who had first shot every bull we encountered. We had more hunters than horses, which meant that after the initial crossing, I was on my feet a lot.

Every morning was a brutal test. All the trails leading from the camp had names like Ballbreaker and Cloudsplitter. The worst of these was the Devil’s Stairs, a mile-long staircase with merciless switchbacks. The first morning, as the horses came forward, the three of us walked up the steps. Halfway through, we were stopping every hundred steps to catch our breath and not to jump. When we finally reached the summit, daylight was spreading among the higher peaks, and one of the hunters, Stephen, who had managed to get a horse that morning, was waiting for me. He lay back in his saddle while I finished choking and panting. Finally, I was able to fully stand and Stefan said, “Damn, man. It was a tough journey.” I wanted to drive him off the horse.

With all the walking that day and the next, and the white noise of my noise and my flatulence in my ears, I had many opportunities to wonder why I would go all this way and subject myself to such physical hell with little opportunity by taking a deer yourself. It ate at me for a while. But on the third day, I found my stride enough to look up instead of at my feet, and I had a moment that sustained me for the rest of the trip.

We had just passed over the brow of a high ridge, and the whole expanse of the country we were hunting came into view—the little white squares of our wall tents in the grassy bowl far below, and the rising high country where the deer were, in meadows and canyons with dark woods. I took them all and noticed how the color of the aspen changed from low to high. Aspens reproduce clonally, meaning that an entire slope of them is often one organism, uniform in color but different from the rest of the slope. The way this happened on the stage in front of me was with vast curtains of shimmering leaves rising in a progression of hues from green to gold. Here, mid-September is not one stage in the autumn march, but several all at once.

It struck me that as we hiked higher in elevation and closer to the deer, we were hiking even further into the fall. It was such a pleasant thought that I didn’t mind walking that far after it, and I even told Randy, the wrangler, “I honestly don’t care if I kill a deer on this trip.” And I meant it. “A dead bull won’t make this place any nicer.”

On the second to last day, we left base camp and got closer to the elk. At this point, we were all exhausted. There were some good options for evening hunting, including several cool walls nearby, each a short, flat hike away. Randy also knew of a spot where he felt sure there would be a bull, but it was a tough hike uphill. I volunteered to tag the latter, but couldn’t get anyone to come with me. All the other hunters wanted to lower the walls, and you can’t blame them. They had also done their share of walking and wanted a break from the steep terrain. However, this meant I had a chance to hunt for myself.

It wasn’t much more than a whim when we bowed to the bull. We had a hard week of hunting with nothing to show for it. Every bull we had called at that point had hung up on us, hung up on us, or completely ignored us. “Let’s see what happens,” Randy said, and he sent a short, screeching kick that wasn’t meant to be threatening. The bull, who was on top of the hill, turning his three cows, paid no attention. Randy backed up the bugle with some cow calls and suggested we cross the meadow to the opposite bank of the wood. We were not half way when we saw the bull flying over the crest of the hill, running towards us.

At 20 yards, a bucking bull elk isn’t just bigger than you might imagine, it’s scarier. I hoped that Randy, who was curled up in a low ball next to me, couldn’t see that my whole body was shaking and that my bow was swinging wildly in front of me. I assumed the bull would spot us eventually, but he was so close now that I could see his eyes were rolling back into his head.

He doesn’t stop,I thought. But like me, he stopped dead and rolled to the side. His eyes were no longer rolling, but he was still looking at me. I didn’t see how I could pull on the bull, but I just wondered how one of his cows squealed from the top of the slope, and he turned his head around and looked back up the hill.

For a trip where I didn’t have to kill a deer, I suddenly felt sure I was meant to. The bull bombed 40 meters downhill into the shot, lost its front legs and sank into a heap.

We wrapped some of our hunting clothes over the field-dressed carcass to keep the bears away, then walked to camp in the dark. At dawn we rode again with some pack mules and arrived just in time for the sun to light up the curtains of the aspens, completely golden this high up and into autumn. Randy dumped most of the game bags onto the back of one mule and the rest, along with the head and horns, onto the other, then snaking ahead of me along a path into the clearing below.

After a while, he stopped to let me catch up with him, and when I caught up, he said, “How do you feel now about the dead deer and how beautiful this place is?”